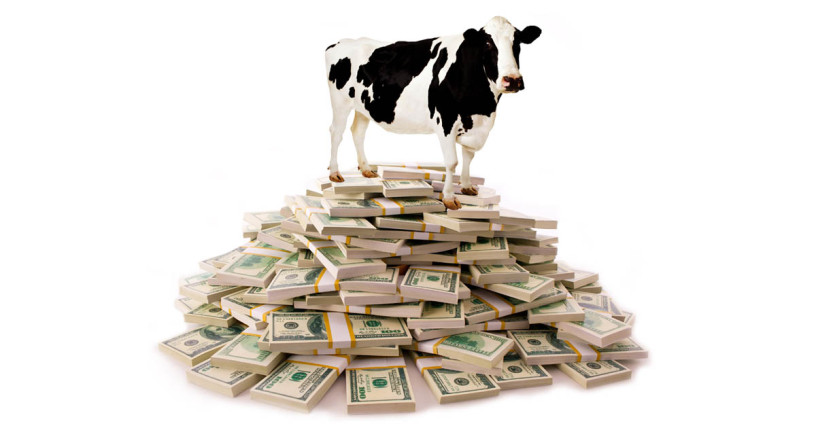 Anyone following the April 15th hearing on Sweet Briar on Twitter saw the following tweet, and shortly thereafter, everyone was using a new hashtag:

Leader of #SaveSweetBriar group Sarah Clement testifies she'd have reached into her "cow money" had she known of closure risk.

And thus #CowMoney was born…

Nobody really knew what on earth cow money was.  I just assumed it involved a cattle operation or something. I caught up with Sarah Clement on Facebook this morning, and out of sheer curiosity, I asked her what cow money was.  It’s a fantastic story that spans three generations – far and away better than just thinking she owns some cows.  I was going to take her response and work it into an article, but after reading it again, I thought it was best told in her own words:

My four brothers and sisters and I inherited our family farm in Kentucky after my mom died in 2009, and then her brother, our Uncle Pepper (Preston Mansfield of Munfordville, Kentucky), died in 2012.  The farm has 340 acres, old tobacco barns from the 1800s, a tenant farmhouse, and it came with 70 head of beef cattle.

My brother David Clement, a patent lawyer, lives in the big house in Munfordville that the five of us inherited when Uncle Pep died as well. My brother has been acting as farm manager for the last 2-3 years since Uncle Pep’s death. This past December, at our annual family meeting about farm business, we all decided that none of us really wanted to be cattle farmers! So we agreed to sell off the beef cattle at auction. David arranged for 8 tractor trailers to pull up, one at a time, at the farm in Rex, Kentucky on New Year’s Day 2015 to haul the cattle off to Glasgow to the cattle auction. Beef cattle prices have been at an all time high, and thus the time was ripe to transfer title to all these cows! We netted a nice sum at the auction, and each of the five of us received a nice check later in January that we all referred to as our “cow money.” It was an unexpected windfall and we were all thrilled!

Had I had any inkling of the distress of my alma mater, and my sister’s, niece’s and mother’s alma mater as well as Mom’s place of burial (in the Columbarium on Monument Hill), I would have gladly given my windfall cow money to Sweet Briar. But I had no idea.

When I was asked by the college for a donation the following month in honor of my 40th reunion, I was asked for $250 and happily wrote that check. I would have written a much larger check, using my cow money, had anyone given me any inkling of the imminent closure announcement and the alleged financial distress of my college, which has graduated three generations of women in my family: Martha Mansfield Clement class of ’48; me Sarah Preston Clement class of ’75; my sister Ellen Clement Mouri, class of ’80, and her daughter, my niece Sarah Mansfield Mouri class of ’06.

This is a very personal battle for me and my siblings and nieces and nephews in honor and in memory of Mom. She would have LOVED for me to have given our cow money from her Mansfield family farm in Kentucky to her alma mater!

And THAT, Jay, is the story of cow money.

The vast majority of us thought was just a funny statement referring to a stash of cash Sarah had tucked away.  Learning that Cow Money is a legacy left by her mother who graduated from Sweet Briar 67 years ago?  Well, that just makes it awesome.

I am feeling confident she will get to put that cow money to good use and honor her mother.  And when she does, someone needs to put a sculpture of a cow on a pedestal with #CowMoney on the plaque out in one of the pastures.