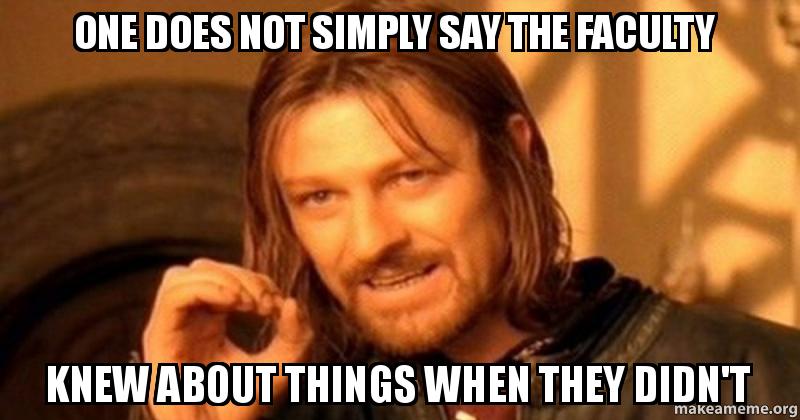 In a letter to the American Association of University Professors (AAUP), Sweet Briar faculty members voiced strong opposition to assertions made by college president Jimmy Jones regarding faculty knowledge and involvement in the college’s financial problems.

The letter, which is dated June 15, 2015, lays out how faculty members were kept in the dark about the school’s  financial condition, and the board’s decision to close the college.

When faculty and staff received an email on March 3rd, calling them to a meeting at noon, we expected to be told which of the initiatives that had been researched they would be implementing. When the President announced that the initiative chosen by the Board was to close the college in August, and terminate employment in June, the blank faces and stunned silence – followed by screams and uncontrollable weeping – evidenced what an unexpected shock that announcement was.

We find that President Jones’ letter makes several false and misleading claims concerning events leading up to the abrupt decision by the college’s Board to close the college this summer, which decision was announced on March 3 of this year, and concerning the process of closing the College.

I.            We note that the President writes that Sweet Briar College has never adopted AAUP policies other than the 1940 Principles on Academic Freedom and Tenure. Yet the letters sent to tenure-track and tenured faculty contained language from other, later AAUP policies to justify terminating their positions, referring to a “severe financial crisis” that “fundamentally compromised the academic integrity of the institution as a whole.” A copy of one of the termination letters is attached. We also believe the college has by its conduct endorsed later AAUP policies as it has referred to AAUP principles over the decades since 1940.

II.            President Jones’ response suggests that the faculty was well aware that the college was on the brink of financial collapse and, in fact, closing. This is not true. The faculty had been told of financial troubles for decades, yes, but the administration had at no time intimated that those financial troubles might lead to the college precipitously announcing in March that all faculty positions would be terminated four months later (or, indeed, three months after formal letters of termination were sent out), and that severance pay could be hoped for at some time in the future, but not guaranteed, in spite of tens of millions of dollars remaining in the endowment.

While the administration noted excessively high draw on the endowment for decades (going back through the 1990s at least), many actions taken by the administration suggested that the college was not facing financial exigency at or prior to the time that the college’s Board chose to close the college. Over the past fifteen years, the college engaged in several expensive building projects, including a “student center” and dining hall, and new residential facilities for students (“Green Village”), and a gym, and just this past October opened an impressive library renovation, with substantial additions to the building. Extensive classroom improvements, with sophisticated digital upgrades, were undertaken over the past few years. At the same time, longstanding freezes on faculty salaries were lifted, and salary increases re-appeared over the past two years. The latest, a 3% increase, was awarded in January 2015, two months before the college announced it could not afford to continue operating. The former president (Jo Ellen Parker) and college’s Board had opted not to pursue a capital campaign to raise funds to increase the endowment and support the college. Our last capital campaign concluded nine years ago, and apparently the Board felt a new one was not needed. Nor did the administration, anticipating financial distress, seek to lift restrictions on restricted endowment funds in order to continue operation of the college or to plan a truly orderly wind-down; instead, after deciding to close, they appealed to the Attorney General of Virginia to use such funds to assist in closing the college.

Members of the administration warned us that enrollment was down (they said “over the long run” but in fact, only over a couple of years), and that high discounting rates meant tuition revenues were down. But enrollment numbers had been notably lower in the past (2003, for example), and the college had not hired a Dean of Enrollment with expertise in current recruitment and scholarship-setting for over two years. Indeed, the college announced it had no intention of doing so. This academic year, retention rates from fall to spring for the first-year class were very high, and an exciting recruitment effort (a Presidential Scholarship competition) had brought a large number of invited, highly qualified, students to the campus just days before the closure announcement.

The Board has admitted to a high level of secrecy concerning the possibility of closing. Certain members of the Board have said, and President Jones’ letter to the AAUP notes, that anything less than complete secrecy about the possibility of closing the college would scare away students, and jeopardize discussions the college was (also secretly) conducting with other institutions about possibilities of merger. Part of that secrecy included not telling the faculty of the possibility of closing the college. To suggest that the faculty could read the future in enrollment trends announced by pundits is ludicrous; faculty members themselves had proposed many excellent, but ignored, suggestions for better marketing and improved recruitment (starting, of course, with hiring a Dean of Enrollment). In 2009, when former President Muhlenfeld retired, the college announced that enrollments were up, endowment draw down, and the concluded fund-raising campaign successful.[footnote]http://sbc.edu/news/uncategorized/sweet-briar-president-announces-plans-retire-2009/[/footnote] When Jo Ellen Parker announced her abrupt resignation from the college presidency last spring, she noted that the college was “poised to take another strong step into a distinguished future”[footnote]http://sbc.edu/news/sweet-briar-president-leaving-lead-carnegie-museums-pittsburgh/[/footnote] and, as she repeatedly said to alumnae and faculty, “to flourish.” We believed that statement to be truthful and true.

In part, our belief was sustained by the strategic planning for the future that the current president’s letter refers to. The Board hired outside consultants and involved faculty in such planning only through soliciting ideas that were then mostly ignored, while a consultant prepared a list of fairly unimaginative ideas. Faculty discontent at the process was high; the process was not one in which faculty members were involved at any significant level. Even as the faculty voiced significant discontent at being cut out of planning by the use of consultants, the consultants’ work itself was abrogated mid-process. Only after the Board’s announcement to close the college, when the County Attorney for Amherst County, Virginia, commenced litigation against the college, the President, and a member of the Board to prevent the closing of the college, were the partial results of the various consultants’ research made available to the faculty in the form of a filing with the court.

When faculty and staff received an email on March 3rd, calling them to a meeting at noon, we expected to be told which of the initiatives that had been researched they would be implementing. When the President announced that the initiative chosen by the Board was to close the college in August, and terminate employment in June, the blank faces and stunned silence – followed by screams and uncontrollable weeping – evidenced what an unexpected shock that announcement was.

III.            On p. 3 of his letter, the President lists actions the college has undertaken to assist faculty to obtain other employment. Of course, the one thing he acknowledges the college has not done is guarantee severance which, even if any amount is forthcoming, will not be offered at the time of unemployment. The uncertainty about severance pay is not, as President Jones’ letter implies, because of on-going litigation: these conditions of uncertainty were announced to us on March 4th well before any litigation was hinted at. That uncertainty has only grown as a result of the college’s public disclosure just two weeks ago that it has significantly less unrestricted endowment assets than previously reported.

The list of things done to assist the faculty is misleading at best. Perhaps some faculty members have been helped by the college contacting other schools and looking for positions for them: if so they are few, and most have not heard anything about this. The other things listed are no more than normal operating practices, with the exception of selling used computers to members of the faculty. The Dean normally writes reference letters for faculty applying for fellowships, grants, and other opportunities. That is part of her job, not special assistance provided in the face of terminating their employment. The endowed Faculty Grants funds that support travel to conferences “for professional development” have always done so, and those monies are overseen by a faculty committee (and not the administration). The Dean’s travel funds annually provide faculty members with $450 to travel or support research, and faculty members use this small amount at their own discretion to support professional activity. No special funds or efforts were made to send faculty members to places to seek employment. Indeed, as we all know in academia, interviews for new positions conducted at conferences will be conducted in the fall of 2015 or early 2016, not before June 30, 2015, after which date no funds are available for the terminated faculty. Some faculty with on-going research grants have received assistance from the college in transferring those grants, but only because they took action to do so, had to press the college to do its part, and because the college is obligated – not volunteering or going out of its way – to comply. The President’s letter does not mention insulting employment workshops held for the faculty in which job-retraining specialists noted that the local community college offered skills training, saying that faculty members could become certified in commercial vehicle operation in a couple of months. Finally, the offer to sell faculty members computers – many of which are five years old or more and nearly worthless – is also insulting and not a mark of generous assistance.

In short, we rebut the claims made by the President in his letter responding to the AAUP’s inquiries. They are misleading and most of them untrue. We urge the AAUP to continue to inquire into the abrupt decision to terminate employment for all faculty, invoking “financial exigency” while refusing many offers of financial and legal (restructuring) assistance, giving faculty three months’ notice at a time of year when employment options are scarce, and offering only empty promises for some form of severance in the distant future but nothing for their actual period of unemployment.

Signed (all signatories are faculty or faculty emeriti at Sweet Briar College),