The accountant working for Sweet Briar College, Harold Martin,  filed a supplemental expert report to the courts. This has created a stir because it suggests Sweet Briar’s financial position was even more tenuous than once thought. I don’t think it changes much, and the report brings up more questions than answers. Non-profit accounting is very difficult, but let me try to break it down a bit to understand some of what was said in the supplemental report. I’m not an expert in this, so please correct me if you notice errors.

Although Martin did 5 years of adjustments, let’s focus on the most recent year, FY 2013, ending June 30, 2014. At this point, according to the audited financials, Sweet Briar had $163,923,890 in total assets. This does not include non-monetized assets like the art collection.

A look at the assets shows that they are mostly in the form of investments and in land, buildings, & equipment. It’s unclear to me whether this includes Sweet Briar’s land on which the college is situated, but I don’t think it does. The item labeled “Beneficial Interest in Perpetual Trust” refers to an account that we do not own but that we get the interest from, the Carrington Trust. It is similar in function to any other permanently restricted fund, but it is lost if the school closes. If it’s considered an investment, Sweet Briar had around $96 million in investments, $57 million in land, buildings, & equipment, and $11 million, less than 7%, in assorted other bits.

So, Sweet Briar had property and investments. It also had some liabilities.

Most of the liabilities are in the form of bonds.

We can get total net assets by simply subtracting the liabilities from the assets.

So, this is really the starting point for the finances of Sweet Briar. It has about $134 million in net assets. Most of that ($96 million) is in investments, and most of the rest is in land, buildings, & property ($31.5 million).

The most important first point to remember is that nothing in the supplemental report changes these basic figures. Before the report, Sweet Briar had the same amount of assets, divided the same way between investments and land, building, & property, as it did after the report. What changed was how the assets were categorized.

Ok, so what is going on in the supplemental report? Well, it turns out that in the audited financials,there are separate sections to describe the differently restricted assets. 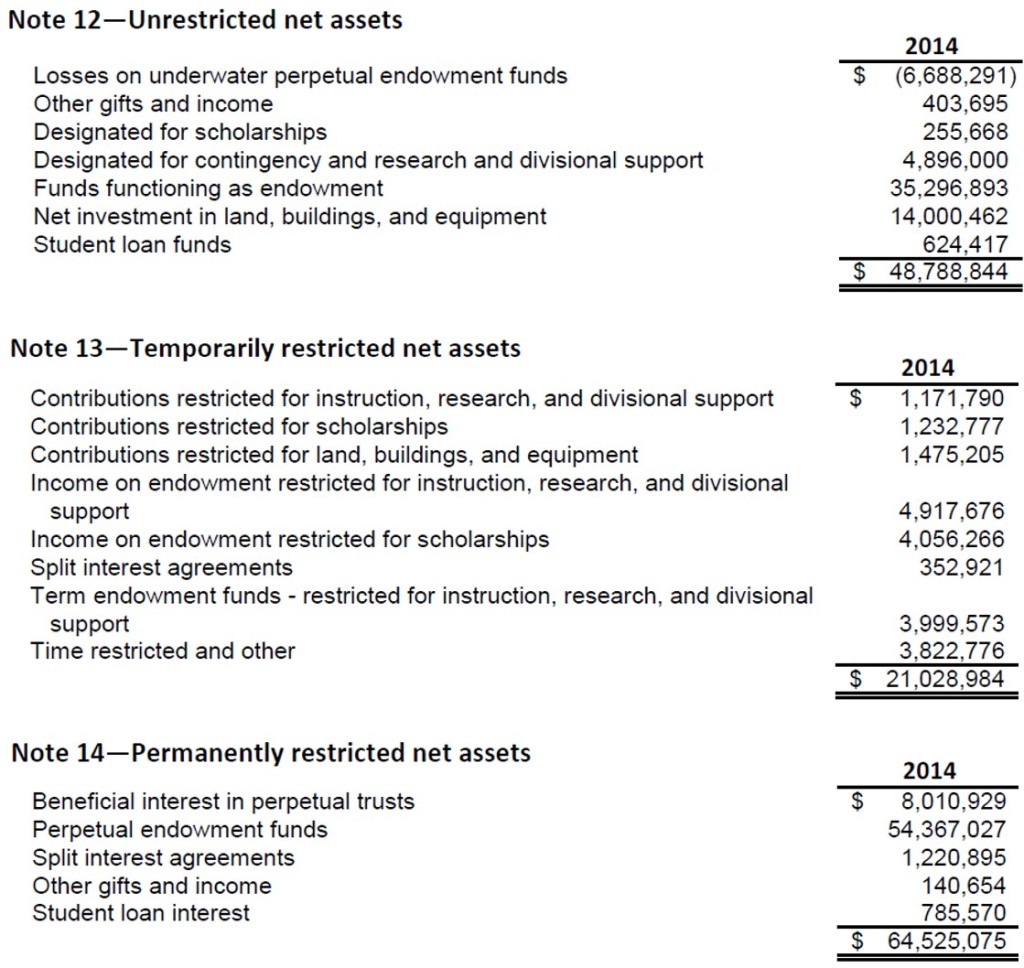 What this means is that the $96 million in investments and $31 million in land, buildings, & equipment must be listed somewhere in one or more of the above categories in Notes 12-14. But we don’t know where it all goes. We know one piece for sure. The Carrington Trust, the fund from which Sweet Briar gets beneficial interest but doesn’t own, is an $8 million permanently restricted non-endowment asset. Most of the above categories, like “contributions restricted for scholarships” likely contain funds that draw from the remaining $88 million.in investments.

So, the key question is where have the other assets related to land, buildings, & equipment been placed? There are about $17.5 million of them, so they shouldn’t be hard to find. It’s possible that a small amount are in temporarily restricted funds (like in “contributions restricted for land, buildings, and equipment”). It’s possible it’s scattered throughout all the funds, though that seems odd considering what the funds are listed as. It looks to me like the two most obvious choices are permanently restricted “perpetual endowment funds” and unrestricted “funds functioning as endowment.” In other words, either a good chunk of unrestricted or permanently restricted endowment seems to be in a form other than investments, a form that is likely much harder, if it’s possible at all, to turn into money that can be used for operations.

The accountant for Sweet Briar assumed that all of the land, buildings, & equipment were unrestricted assets and that $17.5 million of them were incorrectly categorized as endowment funds when they really should have been categorized as non-endowment funds. If that’s the case, it’s very peculiar, and even more peculiar that accountants have been missing that for years.

The other choice is that the permanently restricted endowment contains $17.5 million in land, buildings, and equipment. Maybe, but that seem’s a bit fishy, too.

Are there any other possibilities? Probably. Perhaps Sweet Briar owns $17.5 million of easily salable property in central New Jersey that is right on the border of endowment and asset.  Regardless, one thing is clear: The $31 million in land, buildings, & expenses is contained, in its entirety, in the categories above. $14 million is in the unrestricted “net investment in land, buildings, & equipment” category. And the remaining $17.5 million is in one or more of the other categories. There are no lost assets here. The question is simply how they have been categorized. But that really is a mystery.

It would follow that of the $88 million in long-term investments that earn interest used for operations, $51 million would be in the form of temporarily restricted and unrestricted funds. When these funds are used for operations, they no longer generate interest.  Burning through unrestricted and temporarily restricted funds would be burning through those funds that generate the most interest-based revenue. As money is spent, average return on each endowment dollar drops. That seems an odd way to set-up an endowment.

Consider, also, that the inflation-adjusted Sweet Briar permanent endowment stays fairly constant, year to year, independent of stock market fluctuations. This is consistent with the goal of maintaining the permanent endowment’s purchasing power over time.

It’s hard for me to see why Sweet Briar would put more and more assets that depreciate (or at least don’t increase in value) into a permanent endowment that must maintain purchasing power (and so grow with inflation) and that is expected to provide operating revenue for the college.

So, given what is known, I have to agree with the Sweet Briar accountant, that the most likely place for the missing $17.5 million in land, buildings, & equipment is in the category of unrestricted “funds serving as endowment.” It doesn’t really matter if you reclassify the $17.5 million as a non-endowment asset, as the Sweet Briar accountant did, or not. What matters is that those are not liquid assets and couldn’t be used to pay bills in a pinch. Furthermore, at least some of them would be exceedingly difficult to ever turn into cash, until the college closed, like the library and gym. Maybe they are unrestricted assets in the sense that there are no donor stipulations, but they can’t pay off bonds.

All this is largely semantics. The bottom line is the same. Sweet Briar, as of 6/30/14,, had: $88 million in interest-generating investments; $31 million in net assets related to land, buildings, & equipment; interest from an $8 million fund; and, a few million more scattered about. Of that, all but $36 million could be freed from restrictions by the board or by Attorney General Mark Herring. Only $36 million needs a judge’s order. Based on the new regulations, there also appears to be some flexibility in how some of the restricted money could be used even without external approval.

I agree with the board that the finances are currently a mess. They very convincingly brought that about. Still, big picture, this just isn’t a terrible situation to be in.  Especially when Sweet Briar could count on alumnae giving of at least $60 million/decade.  Unless you really believe it’s impossible to run a women’s college on Sweet Briar’s campus. Which is what the board seems to be arguing. But all available evidence suggests that a viable model is possible and that leadership just messed up.  The right answer here is to reorganize, get new leadership, and try again.  Herring himself could free up enough funds to get things off the ground, so he really does hold a lot of power. And we have the power to hold him accountable.

PS I was reading again about underwater funds (that mysterious negative balance unrestricted endowment fund), and I had been thinking about it wrong. I thought that underwater funds must get above water before interest on them can be used for operations, but that isn’t the case. The new UPMIFA guidelines that went in effect in October 2012 gives institutions much more leeway. Underwater funds can still be used for operations. Indeed, it appears that as long as the institution has a reasonable long-term plan for maintaining the purchasing power of endowment funds, it can exercise its judgment about how individual funds are used, including appropriating permanently restricted funds and driving the fund value below fair market value.  The text of the law  implies that some amount of permanently restricted funds can be used in times of need.

Dan Gottlieb is Associate Professor and Chair of Psychology at Sweet Briar College until 6/30/2015.